Mushrooms For Dogs: Fight Back Against Cancer
https://www.dogsnaturallymagazine.com/mushrooms-for-dogs-fight-back-against-cancer/ 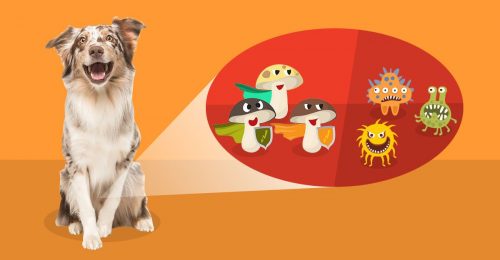 What does your dog have in common with a mushroom:
Both need protection against viruses, bacteria, molds and parasites. And that’s obviously really important. What’s amazing about mushrooms is that they can protect themselves against these things. What’s even better? They can provide the dog that eats them with that same defense! If you’ve ever wondered about the benefits of mushrooms for dogs, you’re going to want to keep reading.

Mushrooms As Superfoods:
Medicinal mushrooms can provide your dog with nutrients that are superior to those provided by most plants, making them true superfoods. Mushrooms are fungi – specifically, cap fungi. Fungi are genetically closer to animals than plants, and in the classification of living things, fungi are a separate kingdom. They have cell walls like plants, but the walls contain chitin, like insects. Chitin is a white, horny substance found in the outer skeleton of insects and crustaceans and in the internal structures of other invertebrates. Chitin is also what gives mushrooms their meaty texture. Like animals, fungi absorb nutrients from plant or animal matter around them, and they cannot photosynthesize as plants do. The amino acid content of mushrooms is comparable to that of animal proteins, and they contain all the main classes of lipids. Mushrooms are the only non-animal based food that contains vitamin D and they also contain considerable amounts of vitamins B, C and E.

Medicinal mushrooms can provide your dog with nutrients that are superior to those provided by most plants, making them true superfoods. This is why most traditional medicine systems include fungi. Mushroom nutrients are protected by the chitinous wall, so their nutrients are released only upon warming. But it’s important to note that most mushrooms contain monomethyl hydrazine, a compound found in jet fuel. It is highly carcinogenic, but inactivated by cooking. This shouldn’t stop you from using mushrooms however, because they’re packed with immune regulating properties. Just be sure you cook them first, for both you and your dog.

Balancing The Immune System:
What does immune modulation mean? It’s kind of like immune balancing. Studies show that constituents in mushrooms can make natural killer cells, T cells, and macrophages more effective. These patrol the body for viruses, bacteria and cancer cells. Mushrooms can increase levels of other normal physiological mechanisms that boost immune function as well. These natural body compounds are complement 3, interleukin and interferon. They’re all part of your dog’s natural defense against viruses. The beneficial compounds present in mushrooms include:
Terpenes
Alkaloids
Coumarins
Lectins
Flavonoids
Beta 1,3 D-glucan
Beta 1,6 D-glucan
Polysaccharides
You will commonly see glucans listed as ingredients in immune modulating supplements. And now you’ll know that they come from mushrooms.

Major Medicinal Mushrooms:
Although there are thousands of mushroom species, only about 25 are routinely used for human and now pet consumption. Most are cap fungi and gilled mushrooms of the phylum (taxonomic subdivision) Basidiomycota.
Some of the most popular and useful mushrooms include:
Shiitake
Maitaki
Reishi
Turkey tail
CordycepsImmune modulation via medicinal mushrooms for dogs can help with the destruction and clearance of viruses, bacteria, harmful fungi, parasites and cancer cells. It can also help push the reset button on allergies and autoimmune disease.

Cancer Fighters:
Mushrooms don’t kill cancer; they help your pet’s body fight cancer. In studies, extracts of reishi containing beta D-glucan were effective in stimulating T cells to release cytokines, which have been proven to fight tumor cells. Lentinan is an immune modulator from Lentinula edodes that triggers Tumor Necrosis Factor and Natural Killer Cells. This is a real substance and a cell type found in the body that can kill cancer.

Natural Antioxidants:
Other nutritional benefits of mushrooms include their effectiveness as antioxidants for free radical scavenging. Free radicals are produced as a result of cellular metabolism. Too many free radicals lead to aging, arthritis and cancer. Synthetic antioxidants are suspected to be carcinogenic, so researchers are seeking natural antioxidants and finding them in mushrooms such as reishi and turkey tail. Through the power of chemical reduction, these mushroom extracts can donate hydrogen atoms to break the free radical chain. The regular button cap mushroom has high glucan content, which makes them great at donating hydrogen atoms, which is the job of an antioxidant.

Prebiotics:
Prebiotics feed probiotics, which are the good bacteria in your dog’s gut. Good bacteria prevent diarrhea and constipation, produce B vitamins and support the immune system. There are three to four pounds of germy ecosystem in the gastrointestinal tract and this system needs feeding. High fiber mushrooms are perfect for the task: mushroom terpenoids are antimicrobial against pathogenic bacteria, and not against beneficial bacteria. A 2013 study by the Institute of Food Technologists found that the polysaccharides from the stem of shiitake and other mushrooms can enhance the survival rate of Lactobacillus acidophilus, Lactobacillus casei, and Bifidobacterium longum during refrigeration. The mushroom constituents also had protective effects on these probiotics in simulated gastric and bile juice conditions. These results showed that mushroom wastes, which are cheaper than other sources, could be an important new alternative source of prebiotics. [Related] There are a ton of other natural pre and probiotic sources. Find the easiest ways to add them to your dog’s diet here.

The King Of Mushrooms:
From the phylum Ascomycota, cordyceps is the famous caterpillar fungus, worthy of special discussion. This fungus attaches its stalked fruiting body to a caterpillar larva. Harvesters collect the fungi and larvae and sell them as a unit. The preservation of this symbiotic relationship may be crucial to the efficacy of the product. Use care when selecting a supplement: some products examined by the FDA contained only rice flour. Not all supplement makers are reputable. Cordyceps contains important constituents such as polysaccharides, vitamins B, E and K, amino acids and fatty acids. It can help with lowering cholesterol, protecting the liver and kidneys, anti-cancer, antioxidant, anti-asthma and for balancing blood sugar. A cordyceps extract has been shown to reduce tumor size and prolong survival time in mice with lymphoma. In TCM, cordyceps is a kidney tonic. Studies have shown beneficial effects against nephrotoxins, which can damage kidneys. Cordyceps also increase corticosteroid production and protecte the kidneys in studies where it was used with cyclosporine to prevent tissue rejection. A cordyceps powder inhibited antigen-induced eosinophils in rats and a cultured extract improved respiratory symptoms in 75 to 85 percent of participants with severe disease in two clinical studies. Eosinophils are a type of white blood cell that increases in the blood in response to allergens.

Mushroom Kombucha: Topical Skin And Wound Healer:
You can grow your own kombucha “mushroom.” You make it using a starter fungus you can get online. To make it:
Dissolve six cups of sugar in green tea
Add this liquid to the starter kombucha fungi
Allow seven to 10 days to ferment

You can either offer the fermented tea as a drink or apply it as a rinse to your dog’s irritated or yeasty skin. This SCOBY (Symbiotic Colony Of Bacteria and Yeast) is considered by many to be a mushroom but is actually a combination of yeast and bacteria. It works well to crowd out bad bacteria but some sources caution that this probiotic tea can become contaminated and cause acidosis. It can also cause significant detox symptoms, so watch the amount you give your dog.

Mushrooms have amazing potential as functional food medicines and it is easy to see why they can push the reset button on allergies and autoimmune disease. I use these major mushrooms in every cancer treatment protocol for my canine patients. However, even holistic veterinarians have barely scratched the surface of the potential for these miraculous mushrooms for dogs to prevent and treat disease.