Diagnosing megaesophagus in dogs and cats:
April 2, 2007 By Allison Zwingenberger
http://www.veterinaryradiology.net/136/diagnosing-megaesophagus-in-dogs-and-cats/
Megaesophagus is one of those conditions that covers a broad range of severity. The esophagus can have a mild, focal motility problem, or the entire organ may be dilated and functioning poorly. In addition to the variety of radiographic appearances, there are many causes of megaesophagus in dogs and cats, from myasthenia gravis to idiopathic. It can be hard to decide what is a variation of normal, and what qualifies as an esophageal motility problem.

There are a few variations in the normal appearance of the esophagus that you should recognize. The first one is a small amount of air in the cervical esophagus, just caudal to the cricopharyngeus muscle (image 1). I see this from time to time, and it often outlines the cricopharyngeus muscle, or upper esophageal sphincter, that lies dorsal to the laryngeal cartilages. The muscle appears sausage shaped, and the air is usually triangular in shape. The cricopharyngeus sometimes gets mistaken for a foreign body because of its size. 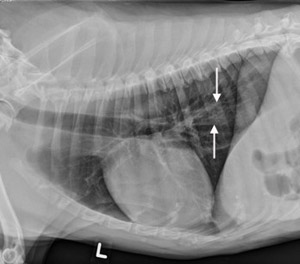 The second variation of normal is a triangular pocket of air in the thoracic esophagus, just cranial to the heart base. Finally, if you are taking three-view thoracic series (a very good idea for diagnosing metastases and pneumonia), you’ll often see some fluid in the caudal esophagus on the left lateral projection (image 2). I think this is because the esophagus and cardia of the stomach are on the left, and the increased pressure from abdominal organs causes some reflux of gastric contents. The key to recognizing all of these variations of normal is that they are transient. If you take another radiograph, they should be gone.
So when do I diagnose megaesophagus? The normal small amounts of air and fluid in the esophagus are normal, but if there are more than usual, or the esophagus is dilated along a larger portion of its length, I will describe it as megaesophagus (image 3). It’s also supportive if you have more than one radiograph with the same abnormality, meaning that it’s a persistent change. 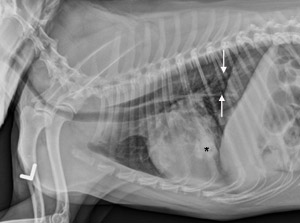 Sometimes megaesophagus is not visible at all on plain radiographs. If the animal has signs of a swallowing disorder, you’ll need an esophagram to make the diagnosis. When the megaesophagus is more severe or static, administering some liquid barium and taking a radiograph will be enough to show you the outline of the dilated esophagus. Fluoroscopy is very valuable in more subtle cases since you can watch the motility in real time.

The most common cause of focal megaesophagus that I see is esophagitis. It usually occurs in the caudal thoracic esophagus, and can be a primary disease, or secondary to another disorder such as hiatal hernia. This type might only be visible on fluoroscopy, so it’s a very valuable imaging technique. Liquid barium is usually enough to make the diagnosis. Barium-soaked kibble can also be helpful in cases where there is an additional problem such as an esophageal stricture.

Once you have made the diagnosis of megaesophagus, keep in mind that additional radiographs or fluoroscopy could be indicated. Imaging is very useful in monitoring response to treatment for megaesophagus, or for following secondary disease such as aspiration pneumonia (* in image 3). Fluoroscopy can also help to diagnose additional esophageal problems such as dyssynchrony of the swallowing mechanism, hiatal hernia, or esophageal masses or strictures.

Diagnosing megaesophagus:
–   recognize variations of normal (transient)
–   persistent abnormal dilation of the esophagus with gas or fluid
–   if static, plain radiographs may be all you need
–   use fluoroscopy in cases of less severe or dynamic disease
–   follow up imaging for response to treatment and monitoring of complications such as aspiration pneumon