As a dog owner, it is important to understand that your four-legged friend shares a lot of common health concerns with humans. For example, in addition to such conditions as seasonal allergies, diabetes, arthritis and even cancer, your pooch can have seizures just as humans do. In fact, epilepsy in dogs is one of the most common long-term neurological canine disorders.A chronic condition that causes dogs to have repeated seizures, epilepsy can be a source of great distress for owners, particularly if it’s the first time you are witnessing this disorder in your beloved pet. However, with proper education, treatment, and a keen level of awareness, you can help to preserve your dog’s quality of life and minimize certain triggers along with your vet’s guidance and supervision.

Epilepsy in Dogs: Understanding Your Dog’s Condition:
For most dogs, epilepsy is a lifelong disease requiring a regimented routine of care and treatment as prescribed by your veterinarian. A canine seizure is the result of abnormal electrical impulses in the brain which lead to sudden but short-term disturbances in your dog’s behavior and physical movements. Epilepsy, also known as status epilepticus, is a general term for neurological disorders that cause recurring seizures and can last for longer periods of time. These seizures can be caused by trauma, toxins, brain tumors, infections or issues with your dog’s blood or organs. Your dog may or may not lose consciousness with these types of seizures. If your dog experiences more than one episode of seizures, he may be diagnosed as epileptic. 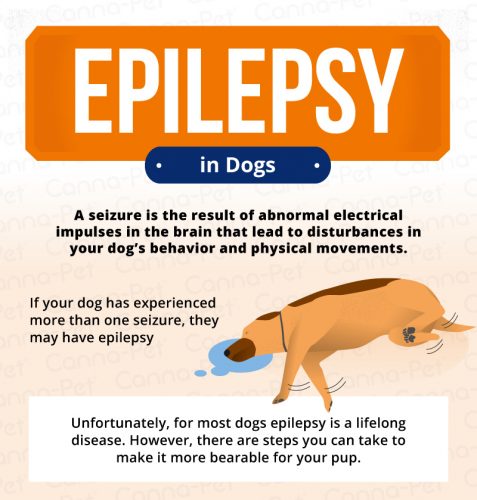 There are a variety of causes for dog epilepsy, such as brain tumors, toxins, low blood sugar, problems with specific organs, and more. Although there is such a variety of causes, sometimes we don’t know the causes of seizures. Those types of seizures are called idiopathic. Some breeds have a higher predisposition for the condition. Certain types of seizures are also genetic in nature and therefore hereditary. As a result, most experts recommend against breeding dogs who have been diagnosed as epileptic, as the trait can be passed along to offspring.

Signs That Your Dog May Be Epileptic:
If you believe your dog may be suffering from canine epilepsy, it is crucial to make an appointment with your vet immediately for a complete physical evaluation, particularly if it’s the first time he or she has had a seizure. Once your pet’s physician has conducted a thorough examination, including bloodwork and other tests, he will consider whether or not your dog has had at least two separate seizure episodes more than 24 hours apart. Because certain signs can be symptomatic of other diseases or underlying health conditions, it’s important to provide your vet with as much information about your pet’s condition as possible during your visit.

Some primary symptoms of dog epilepsy include:
–   ‘Paddling’ of the legs (as though he’s treading water)
–   Collapsing or falling down to one side
–   Excessive drooling or foaming at the mouth
–   Frenzied barking or whining
–   Head shaking
–   Incontinence (loss of normal bowel/urinary control)
–   Irregular seizure attacks that commence and finish suddenly
–   Loss of consciousness
–   Marked mental/behavioral changes
–   Mild convulsions (such as twitching and jerking motions)
–   Muscle twitching and spasms (especially noted in the face)
–   Signs of panic, bewilderment, or confusion; dazed or ‘far away’ look
–   Stiffness of the extremities
–   Teeth chomping; chewing
–   Temporary loss of vision
–   Uncontrollable shaking and tremors
–   Vomiting
–   Weakness
–   Epileptic attacks with symptoms that appear similar each time 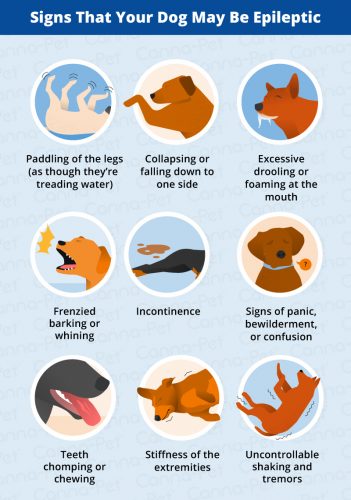 In addition to recognizing the signs and symptoms of epilepsy in dogs, it’s helpful to speak candidly with your vet and ask any questions you might have about preventative care, medication, treatment, diet, and even possible dog epilepsy triggers. Knowing what a dog seizure looks like and how to react can be invaluable moving ahead when it comes to managing your pet’s epilepsy. There are a number of causes for seizures in your dog, including insulinoma (low blood sugar) in older dogs, hypoglycemia (another form of low blood sugar) in puppies, and toxicities (such as ingesting certain types of foods, insecticides or rat poison) in dogs of all ages.