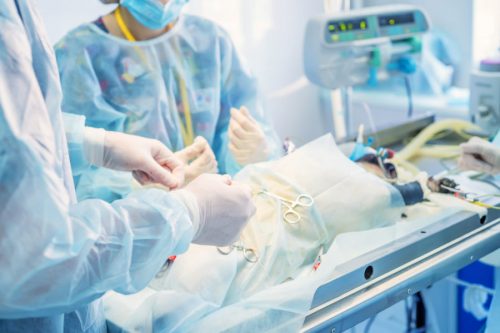 Numerous studies show that traditional spay/neuter surgeries can increase the risk of orthopedic problems, cancer, behavior issues and other conditions.
Those of us responsible for the health of dogs need to continually read and evaluate new scientific studies to ensure we are taking the most appropriate care of our canine patients. This article reviews scientific evidence that, taken together, suggests that veterinarians and dog owners need to revisit the current common recommendation that all dogs not intended for breeding have their gonads removed at or before six months of age. The results of a number of studies on the effects that removing the ovary or testicles (gonadectomy) has on orthopedics, cancer, behavior and other health issues are briefly summarized.

Orthopedic considerations
Bitches spayed at seven weeks had significantly delayed closure of growth plates as compared to those spayed at seven months, and those spayed at seven months had significantly delayed closure of growth plates as compared to those left intact.1 In a study of 1,444 golden retrievers, bitches and dogs spayed or neutered at less than a year of age were significantly taller than those spayed or neutered after a year of age.2 In a study of 203 agility dogs, the author demonstrated that the tibia, radius and ulna were significantly longer than the femur and humerus, respectively, in dogs that were spayed or neutered at or prior to eight months of age as compared to intact dogs (C. Zink, unpublished data). Several studies have shown that spayed and neutered dogs have a significantly higher prevalence of CCL rupture,3–6 even when controlling for body size.3 In a study of 759 male and female golden retrievers neutered or spayed before six months of age, the incidences of CCL rupture were 5% and 8% respectively, compared to no CCL rupture diagnosed in intact males and females.7 Dogs neutered at least six months prior to a diagnosis of hip dysplasia were 1.5x more likely to develop hip dysplasia than sexually intact dogs.8 Spayed/neutered dogs had 3.1x higher incidence of patellar luxation.9 In Labrador and golden retrievers, neutering before six months of age increased the incidence of one or more joint disorders by 2x and 4x to 5x, respectively.10 In a study of 1,170 German shepherds, followed through eight years of age, 21% of neutered males and 16% of spayed females were diagnosed with one or more joint disorders compared with 7% of intact males and 5% of intact females.11

Discussion
Dogs spayed or neutered at or before puberty can often be identified by their longer limbs, lighter bone structure, narrower chests and narrower skulls than intact dogs of the same breed. This differential growth frequently results in significant alterations in body proportions and particularly the lengths (and therefore weights) of certain bones relative to others. For example, if the femur has achieved its genetically determined normal length at eight months, prior to a dog being spayed or neutered, but the tibia (which normally stops growing at 12 to 14 months of age) continues to elongate for several months after that point because of the removal of the sex hormones (which contribute to growth plate closure), then the relationship between the femur and tibia will be different than what was genetically determined. This may result in an abnormal angle at the stifle and a longer (and therefore heavier) tibia placing increased stress on the cranial cruciate ligament (of the knee or stifle joint). It is well known that spayed and neutered dogs are more likely to be overweight or obese than sexually intact dogs,12 and this can be an additional contributing factor to orthopedic diseases. Thus, keeping spayed/neutered dogs lean can help mitigate the increased risk of orthopedic conditions.

Discussion
One study indicated a slightly increased risk of mammary cancer in female dogs after one heat cycle (8% increase), greater risk with two heats (26% increase) and increased risk with each subsequent heat.22 However, a recent systematic review of the publications that advocate neutering to reduce the risk of mammary tumors in dogs indicated that nine of 13 reports had a high risk of bias, and the remaining four had a moderate risk of bias.23 This study concluded that the evidence that neutering reduces the risk of mammary cancer is weak and does not constitute a sound basis for firm recommendations. Additionally, at the time when several of these studies were conducted (late 1960s), incidence rates for all malignant neoplasms were 453.4/100,000 female dogs. Mammary tumors accounted for half of these tumors, or 198.8/100,000. Thus, the actual overall risk at that time of any bitch getting a mammary tumor was only 0.2%.24 In any case, the figures for increased risk of mammary cancer must be compared with the 200% to 400% increased risk of other cancers in spayed females. While about 30% of mammary cancers are malignant,25 as in humans, when caught and surgically removed early, the prognosis is very good.26 This is in comparison to the other cancers listed, such as hemangiosarcoma, lymphosarcoma and bladder cancer, which are usually fatal. Given the balance of cancer risks listed above, owners of bitches should strongly consider having a hysterectomy (ovary-sparing spay) performed rather than an ovariohysterectomy, thus providing while retaining the benefits of female hormones. In addition, the veterinary field should be developing programs for regular examinations, including imaging, to facilitate early diagnosis of mammary cancer in all intact female dogs, as has been performed in women for decades.

Behavior considerations
Early age gonadectomy was associated with an increased incidence of noise phobias and undesirable sexual behaviors, such as mounting.27 Significantly more behavioral problems were seen in spayed and neutered bitches and dogs, with fearful behavior being most common in spayed bitches and aggression in neutered dogs.28, 29 In a prospective study, German shepherds spayed between five and ten months of age had significantly increased reactivity.30 Discussion: A number of early studies claiming to show the positive behavioral effects of spay/neuter were significantly flawed. For example, one of the most-quoted publications to support improvements in behavior, particularly aggression, after gonadectomy does not actually provide any statistical analysis. Additionally, 88% of dog owners in this study stated that their reason for castrating their dogs was to attempt to resolve an existing behavior problem. Owners were also surveyed regarding the dogs’ behavior a mean of 27 months post-castration. These factors likely introduced a significant amount of bias.31 Another study performed a statistical analysis but showed that the age when the dog was neutered was not correlated with the degree of improvement.32 Most critically, neither of these two studies included a control group of intact dogs. One of the more important undesirable behavioral effects of spay/neuter for canine athletes was a finding of significantly lowered energy levels. This was shown in a study that was well controlled and examined over 3,500 dogs.29

Other health considerations
Female, and sometimes male, dogs that are spayed/neutered before puberty have an increased risk of urinary incontinence; it is more severe in bitches spayed earlier.33-36 Spayed female dogs displayed a significantly higher risk of hypothyroidism when compared to intact females.37 A health survey of several thousand golden retrievers showed that spayed or neutered dogs were more likely to develop hypothyroidism.2 Neutered male and spayed female dogs had higher relative risks of developing hypothyroidism than intact females.38 Neutered females had a 22x increased risk of developing fatal acute pancreatitis as compared to intact females.39 Risk of adverse reactions to vaccines is 27% to 38% greater in neutered dogs as compared to intact.40 In a study of female Rottweilers, there was a strong positive association between retention of the ovaries and longevity.41

Summary
I have gathered these studies to show that the veterinary practice of recommending every dog not meant for breeding have his/her gonads removed at or before the age of six months is not a black-and-white issue. Clearly, more studies need to be undertaken to evaluate the effects of spaying and neutering, and in particular to investigate non-gonadectomy alternatives to prevent procreation, such as vasectomy and hysterectomy. After examining the risks and benefits, I have significant concerns with removal of the gonads in both males and females. It is clear that the gonads are not just important for reproduction, but play a critical role in growth, development and long-term health. One study showed that spayed bitches had 30x higher levels of luteinizing hormone than intact bitches42; given that this hormone has receptors on diverse tissues throughout the body,43 it is possible that the lack of a feedback loop for this hormone might contribute to some of the negative effects of gonadectomy, at least in females. It is important that we assess each dog and his/her living situation individually, weighing the risks and benefits of gonad removal. There is no single solution that fits every dog.

Acknowledgment: The author is grateful for excellent in-depth discussions with Samra Zelman on the literature regarding spaying and neutering, and for her careful review of this article.