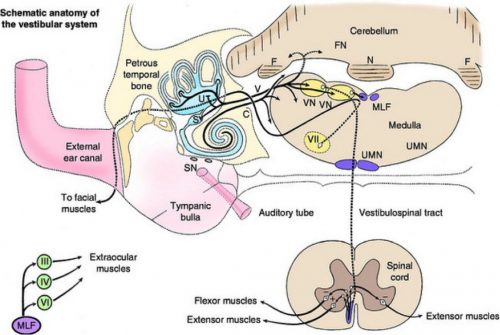 Causes of vestibular syndrome:
The vestibular syndrome can have various causes including:
–   Brain trauma or damage
–   Tumors located in the brain of inner ear
–   Ear infections, which may be due to mites that are present in the ear
–   Severe poisoning
–   Inflammation of the brain
–   No known causes

Symptoms of canine vestibular syndrome:
A dog affected by the vestibular symptoms will display various symptoms. More commonly, dogs will experience dizziness, confusion and lack of coordination, but you may also notice the following symptoms:
–   Frequent collapse, due to lack of coordination
–   The head may be tilted on one side
–   Frequent head shaking
–   Spinning and rolling
–   Rapid eye movement, but the eyes will be opened
–   Dilated pupils
–   Inability to jump over things, stumbling on objects
–   Uncoordinated walk
–   Vomiting
–   Seizures (if the brain is affected)

The symptoms occur without any other warning signs, so the disease has a sudden onset. These symptoms may also be experienced if the dog is affected by poisoning or is in shock. However, the symptoms are severe, so you need to get veterinary help as soon as possible.  To prevent injuries, you should place your pet in a secured area with soft pillows, so he won’t fall and get injured.

Treatment options:
The vestibular syndrome can be treated by managing the diseases that cause the vestibular system dysfunction. If the disease has no known causes, the dog should get medication to control the symptoms and the dizziness.